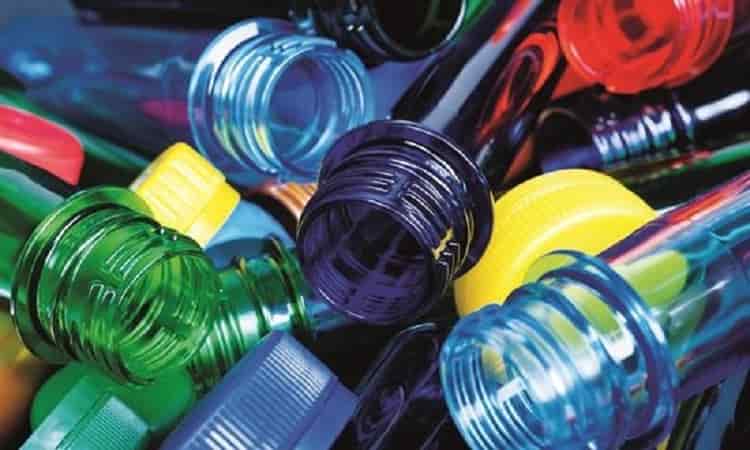 As part of the collaboration, BASF is using Pyrum’s pyrolysis oil from recycled tires in combination with biomethane from agricultural waste to produce new plastics for car components, said the end-of-life-tire (ELT) processor 24 Aug.

The plastic is certified according to the so-called “mass balance method”: An independent certification confirms the use of secondary materials in a product.

This year, the EQE and S-Class will be the first production models to have arched door handles using the plastic.  Bottle-to-bottle-recycling

“We are rethinking the composition of all the materials in our vehicles,” said Markus Schaefer, chief technology officer Mercedes‑Benz Group in a separate statement.

“We anticipate being able to chemically recycle several hundred tonnes of scrap tires from Mercedes-Benz vehicles every year and use the resulting plastic in our new vehicles,” he added.

Commenting on the partnership, Pyrum CEO Pascal Klein said the use of the oil as the basis for the manufacture of Mercedes-Benz vehicle components showed the “high quality the product.”

Pyrum and BASF have been collaborating since September 2020, when the German chemicals major became one of the largest investors in the recycler.

At the time, BASF said it would uptake most of the pyrolysis oil and process it into new chemical products via a mass balance approach within its ChemCycling project. 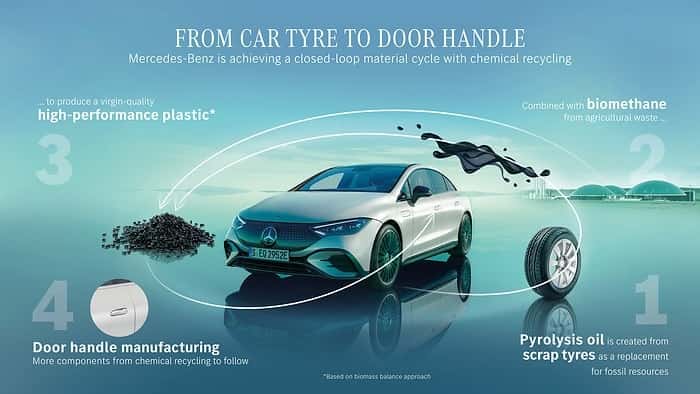 Dhaka-based food manufacturer Akij Food and Beverage (AFBL), a member of Akij Venture Group, is producing its own rPET for the company’s brand beverage bottles on a bottle-to-bottle recycling line from Starlinger.

AFBL decided to start bottle-to-bottle recycling to reduce the growing environmental burden, as well as for economic reasons. “On a competitive market, recycling is the best solution to improve environmental conditions”, said Mohammed Sadikur Rahaman, Plant Operations Director at AFBL. “If you look inside our state-of-the-art recycling facility, you see mountains of used plastic bottles which were thrown away after being used once and became a threat for our environment. Now, each year billions of them will be turned into PET flakes and pellets in order to become new bottles.” Bottle-to-bottle-recycling

The Starlinger Recostar PET 165 HC iV+ installed at AFBL’s production site in Dhaka has taken up operation beginning of April 2022. It turns PET flakes into food-contact rPET pellets and has a production capacity of up to 1,800 kg/h. The recycling process starts with a two-stage heating and drying phase of the washed flakes for optimum preparation for the extrusion process. After extrusion, filtering and pelletising, the produced rPET pellets undergo vacuum treatment in the downstream SSP reactor. This increases the intrinsic viscosity (IV) and effectively decontaminates the pellets so that they can be used for food-contact applications. AFBL currently includes a share of 20 % to 40 % of recycled PET in its beverage bottles for water and carbonated soft drinks.

AFBL sources the used bottles from various vendors on the local market. To achieve the high-quality rPET needed for food-contact applications, the input material must be thoroughly washed to effectively remove foreign substances such as polyolefins, metals, dust and dirt, and separated according to its quality. During the extrusion process, the Starlinger high-vacuum degassing and melt filtration processes ensure that the melt is free from aromatic substances and volatile contaminants that may cause quality impacts (bubbles or smells) in the produced PET regranulate. Bottle-to-bottle-recycling 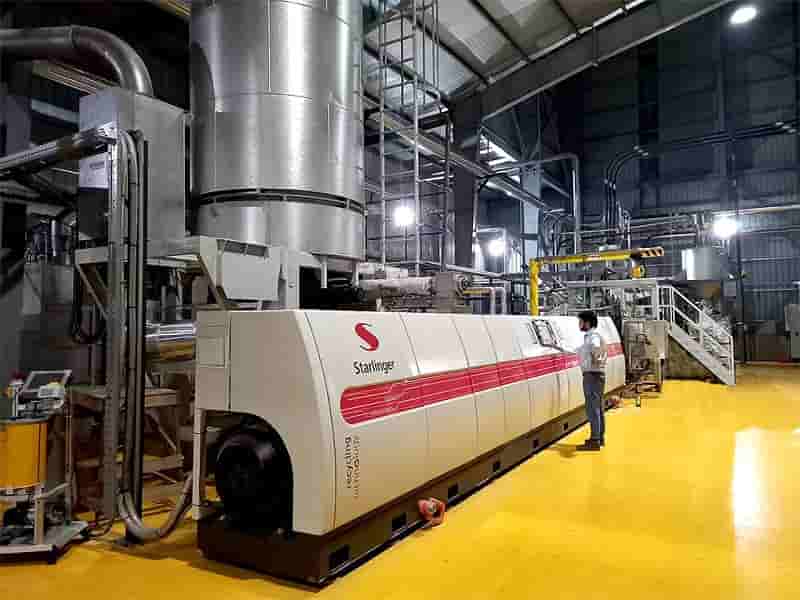 The novel technology will be used to extract hydrogen from Lotte Chemical’s planned imports of green ammonia, generating an estimated 1.2 million tonnes of hydrogen per year, domestically by 2030. Bottle-to-bottle-recycling

With installation of the reactor planned for Lotte Chemical’s HQ, it comes as the first commercial-scale deployment of the Syzygy technology. SCOA first invested in the technology in 2019 and has subsequently worked with Syzygy to see it deployed.

“Our technology expands the accepted paradigms of chemical engineering. We have demonstrated the ability to replace heat from combustion with renewable electricity in the manufacture of foundational chemicals like hydrogen.

“LOTTE Chemical HQ, SCOA, and Sumitomo Corporation Korea are taking a profound step forward, demonstrating through actions their commitment to help decarbonise Korea. Syzygy is honoured to be a part of their forward-thinking efforts in fighting climate change.”  Bottle-to-bottle-recycling 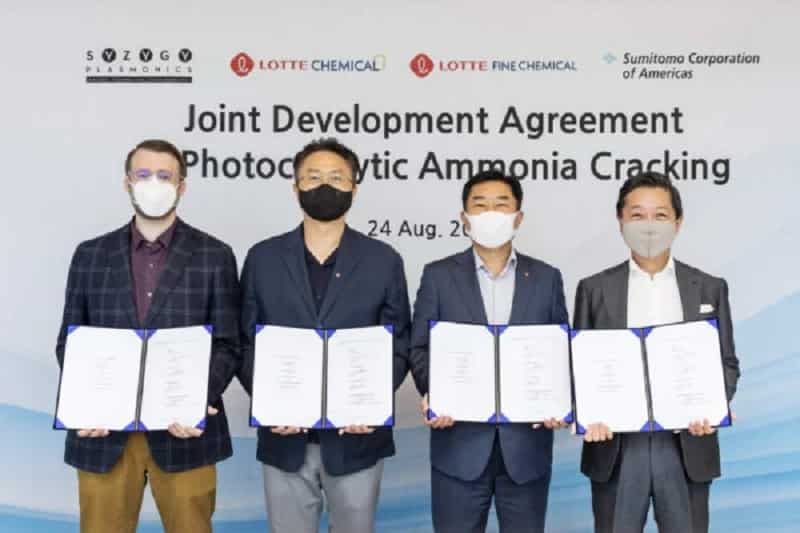 Constantia Flexibles has signed an agreement to acquire 100 % of FFP Packaging Solutions, a leading player for sustainable, flexible packaging in the consumer market from Northampton, UK. The acquisition earns Constantia Flexibles the first consumer plant in the UK and is an addition to its portfolio.

“The acquisition aligns well with our Vision 2025 growth strategy of investing in competitive businesses with potential for future growth. FFP Packaging Solutions joining the Constantia Flexibles Group will expand our overall market position. Its significant experience and credibility allow for strong relationships across the UK food industry. We will be working with the existing management team to continue driving the revolution of sustainable flexible packaging in the UK and beyond,” explains Pim Vervaat (picture), CEO of Constantia Flexibles. Bottle-to-bottle-recycling

FFP Packaging Solutions is established as a leading innovator in flexible plastic packaging. Founded in 1967, the company is the expert for recyclable laminates offering flow wraps, lidding films, and pre-made pouches already today generates over 80% of its sales in sustainable packaging. FFP Packaging Solutions prevails as a long-term trusted partner for major food brands & UK retailers. With over 100 employees, the business operates from its headquarters in Northampton, UK. 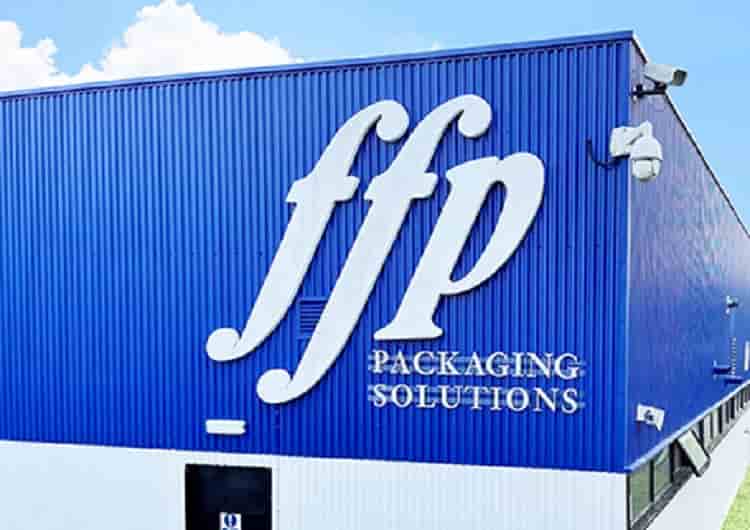 To illustrate the utility of their platform, they have engineered an enzyme that can successfully degrade poly(ethylene) terephthalate (PET), the plastic commonly used in plastic bottles. Bottle-to-bottle-recycling

MIB says that, in recent years, the enzymatic recycling of plastics has emerged as “an attractive and environmentally friendly strategy to help alleviate the problems associated with plastic waste”.

Although there are a number of existing methods for recycling plastics, enzymes could potentially offer a more “cost-effective and energy efficient alternative”, MIB says.

It also says they could be used to selectively breakdown specific components of mixed plastic waste streams that are currently difficult to recycle using existing technologies.

There are considerable hurdles that need to be overcome for enzymatic plastic recycling to be used widely on a commercial scale, MIB says.

One challenge is that natural enzymes with the ability to break down plastics typically are less effective and are unstable under the conditions needed for an industrial-scale process.

To address these limitations, in a paper released in Nature Catalysis, researchers from The University of Manchester have reported a new enzyme engineering platform that can quickly improve the properties of plastic degrading enzymes to help make them more suitable for plastic recycling at large scales.

Their integrated and automated platform can successfully assess the plastic degradation ability of around 1000 enzyme variants per day. Bottle-to-bottle-recycling 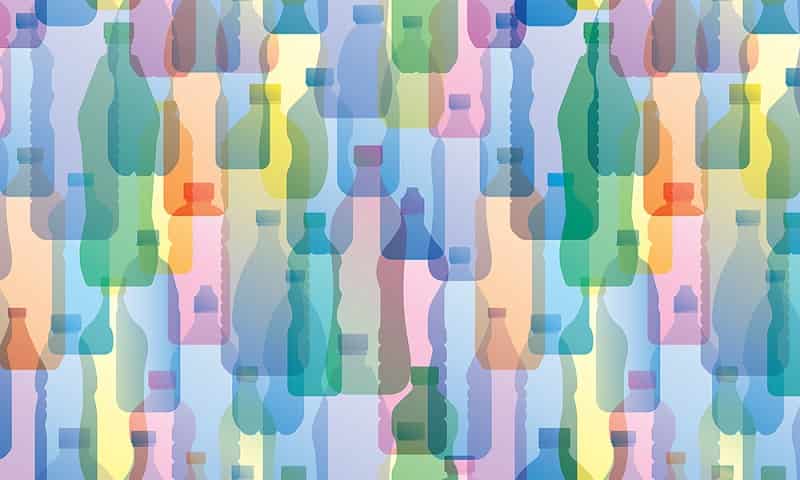 An international team of researchers led by Quanguan Pang at Peking University and Donald Sadoway at MIT reports a bidirectional, rapidly charging aluminum–chalcogen battery operating with a molten-salt electrolyte composed of NaCl–KCl–AlCl3. This differs from other aluminum batteries in the choice of a positive elemental-chalcogen electrode as opposed to various low-capacity compound formulations and in the choice of a molten-salt electrolyte as opposed to room-temperature ionic liquids that induce high polarization.

The multi-step conversion pathway between aluminium and chalcogen allows rapid charging at up to 200C, and the battery endures hundreds of cycles at very high charging rates without aluminum dendrite formation. Bottle-to-bottle-recycling

A paper on the work is published in Nature.

Importantly for scalability, the cell-level cost of the aluminum–sulfur battery is projected to be less than one-sixth that of current lithium-ion technologies. Composed of earth-abundant elements that can be ethically sourced and operated at moderately elevated temperatures just above the boiling point of water, this chemistry has all the requisites of a low-cost, rechargeable, fire-resistant, recyclable battery.

I wanted to invent something that was better, much better, than lithium-ion batteries for small-scale stationary storage, and ultimately for automotive.

The researchers showed that the charging rate was highly dependent on the working temperature, with 110 degrees Celsius (230 degrees Fahrenheit) showing 25 times faster rates than 25 C (77 F).

The molten salt the team chose as an electrolyte simply because of its low melting point turned out to have a fortuitous advantage. One of the biggest problems in battery reliability is the formation of dendrites, which are narrow spikes of metal that build up on one electrode and eventually grow across to contact the other electrode, causing a short-circuit and hampering efficiency. But this particular salt, it happens, is very good at preventing that malfunction. Bottle-to-bottle-recycling

The battery requires no external heat source to maintain its operating temperature. The heat is naturally produced electrochemically by the charging and discharging of the battery. 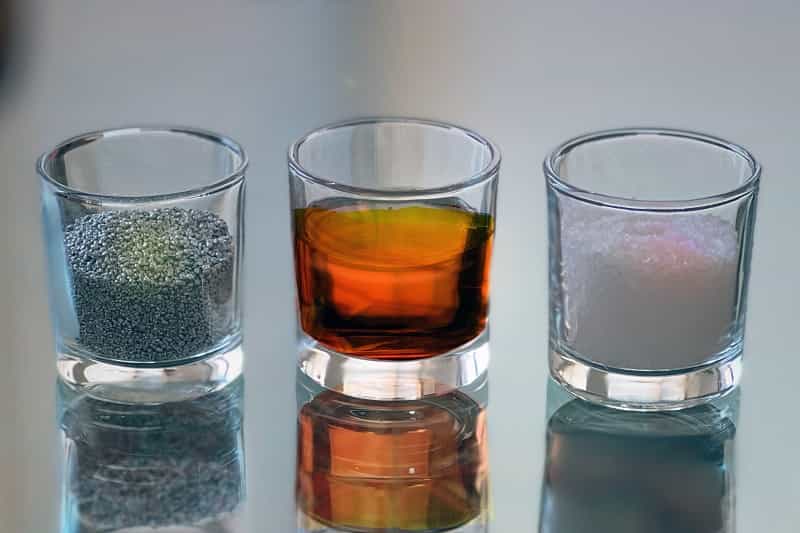 -A world without plastics? Wrong question!

Images of mountains of plastic waste polarise the debate regarding how to solve the problem. Calls are frequently made for a complete ban on plastics. But upon closer inspection, it becomes apparent that a demand of this kind doesn’t make any sense, in particular as regards sustainability..

This text would never have been produced in a world without plastics. It was written using a PC keyboard made of plastic and in front of a monitor with housing that’s likewise made of plastic. OK, maybe alternative means of disseminating this text would have been found in a plastic-free world – for example, with an entirely metal typewriter found at a flea market and a spirit duplicator, likewise made entirely of metal and bought at an antiques store. The printed sheets would then have been put in envelopes, addressed, taken to the post office and sent. But at this point at the latest, your personal control over the use of plastics would end, as the letters would end up in a stackable box made of plastic at the sub-post office.  Bottle-to-bottle-recycling

Freeing the world of plastics is a vision that’s often circulated. It is, however, highly doubtful as to whether the world could do without plastics so easily. It is not only in the electronics industry that the material appears to have become indispensable – the same can be said for modern new builds, means of transport and, not least, the field of medicine. It’s hard to imagine hygiene and protection against infection without disposable syringes, disposable gloves, surgical masks and sterile packaging for dressing materials.

There are reasons why so many different areas of life are difficult to imagine without plastics. The material can take on many shapes, from ultrathin films to high-strength parts for an aircraft fuselage. It is lighter than the alternative materials while offering comparable stability, can be moulded using relatively little energy and lends itself to, for example, hygienically packaging foods to make them last longer.

The handling of the material is the problem

It’s worth taking another look at the question in the title. Before we look for ways in which to free the world of plastics, we should consider whether such a call even makes sense. It doesn’t, as demonstrated by the examples above. The notion that plastics are a problem is influenced by images of the uncontrolled disposal of waste by the consumer society. It is true that plastics which end up in the environment remain there for a long time and are broken down into smaller and smaller particles. It’s therefore not the material that’s the problem, but how it is handled.

Sustainability experts likewise say we should critically question the alternatives to plastic. Glass bottles as a substitute for PET bottles have specific disadvantages. Glass only becomes mouldable from a temperature of at least 1,300 degrees Celsius and therefore requires significantly more energy for its production than PET, which can be worked from a temperature of around 260 degrees.