Up to 2,000 strokes per minute with the SDV-2+2 double-velour needleloom

GRAZ – International technology supplier Andritz is partnering automotive component manufacturers on the development of a range of nonwovens innovations.

With their durability, moldability and, usually, light weight, nonwovens materials are a popular choice among car manufacturers. It’s easy to spot carpet felts, trunk felts and headliners, but there are less obvious yet demanding applications ranging from filters, seat reinforcement and dashboards, to thermal and sound insulation panels, rear shelves and wheel protection.

Andritz technologies are behind all these components, through endlessly-adaptable line configurations which boost production and optimize the visual quality of these key car components. Automotive part producers the world over have placed their trust in Andritz for its knowledge and expertise in the design and manufacture of complete needlepunch, airlay, wetlaid, spunlace and recycling lines.

Most auto projects focus on sophisticated sound insulation, using recycled materials where possible, which contributes to making the car “greener“. In such cases the machinery supplier requires deep process knowledge because of the inevitable impact on equipment design. Processing recycling material in combination with virgin fabrics, for example, calls for strict dust emission control. Recycling-batteries – Green-hydrogen

In this sense the integration of Laroche into Andritz’s portfolio in 2021 has further strengthened the Group’s product range. Andritz Laroche Airlay Flexiloft technology is a case in point: it responds to the fact that Airlay felt customers seek better control over all the process with more accurate weight control on the blending lines, better evenness and easier maintenance. Overall, it offers state-of-the-art solutions for applications such as structural door elements or parcel trays, as well as under-carpet and dashboard insulation felts. With its ResinFelts system, Andritz Laroche also enables the use of heat insulation felts with phenolic resin inside engine area. 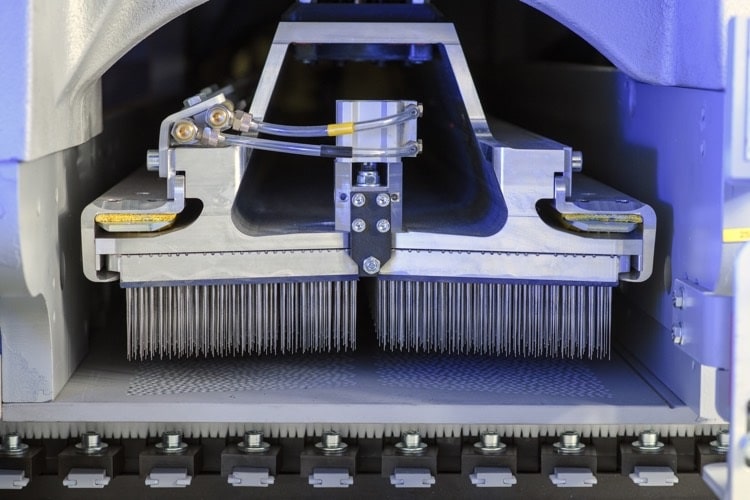 Amut will present recycling and extrusion technologies at K Show 2022

Amut of Italy will present its new recycling and extrusion technologies in a series of immersive tunnels at K 2022.

Amut’s integrated recycling line solutions include sorting, de-labeling, and washing. The company’s patented technology allows dry removal of full body shrink labels from containers with 95% efficiency. Capacity ranges from 2700 to 13,000 lb/hr. These lines are designed for processing either PE film or bottles/containers made from PET, HDPE, or PP. They take contaminated waste to high purity flakes while promising low operational costs along with energy and water savings. Recycling-batteries – Green-hydrogen

On the extrusion side, Amut’s rPET notes that its lines process flakes from post-consumer PET bottles into food-grade foil for thermoforming. They can be configured for 1 to 5 layers, thickness of 6 to 80 mil and width of 3 to 6.5 ft. Output is around 3000 lb/hr. 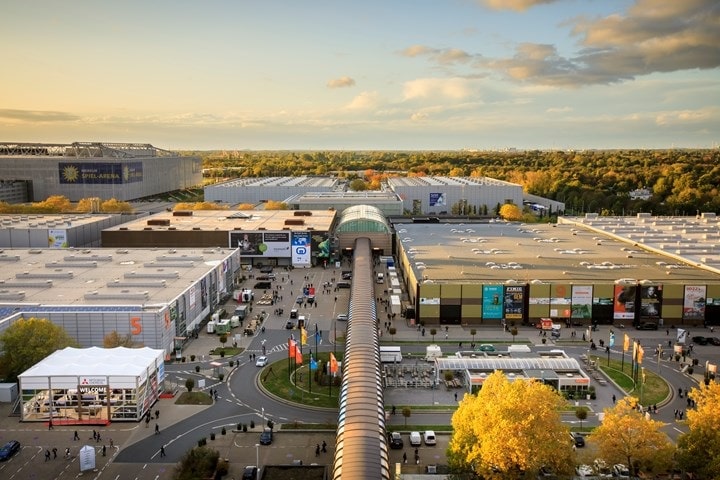 China’s Sinopec is building the world’s biggest factory for the production of hydrogen from renewable sources. The facility, which will be powered by a 300 MW photovoltaic plant, is expected to be put into operation in June 2023.

Sinopec (China Petroleum & Chemical Corporation) plans to produce 20,000 tons of green hydrogen a year once the facility is completed, while the expected reduction of CO2 emissions is about 485,000 tons a year.

The cost of hydrogen production will be only USD 2.67 per kilogram

The plant, located in the northwestern region of Xinjiang, will cost about USD 470.8 million to build, with solar panels covering an area of over 630 hectares. The cost of hydrogen production there will be only USD 2.67 per kilogram, according to Chinese media reports.

The state-owned energy giant announced earlier that the project would cover the whole process of green hydrogen production and utilization, from solar power generation, transformation, electrolytic production, storage, and transportation.

The facility will include the 300 MW solar power plant, a water electrolysis hydrogen production plant, hydrogen storage tanks, and a hydrogen pipeline, according to earlier reports.  Recycling-batteries – Green-hydrogen

The hydrogen produced at the future plant will be supplied to the neighboring Sinopec Tahe oil refinery to replace natural-gas based hydrogen. 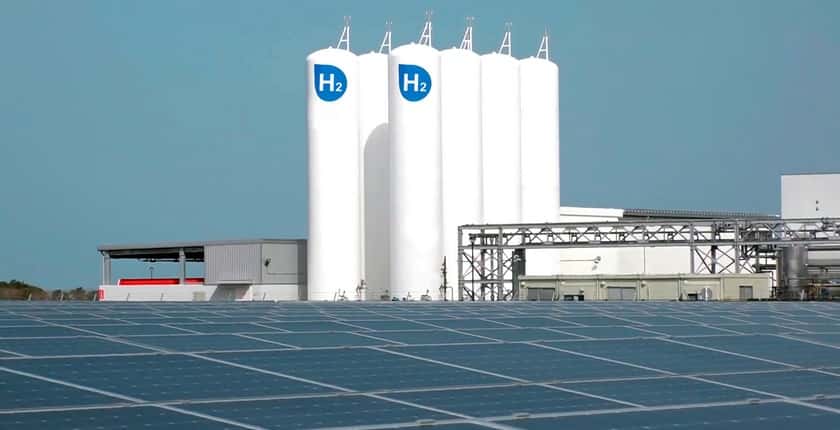 -According to britain’s largest-ever survey, ‘plastic recycling is not working’

Germany-based plant developer Herbold Meckesheim has set up its largest single-line PET recycling plant for Turkey-based recycler Futurapet. Located in the north-western city of Düzce, the plant was built last year and is now operational.

Futurapet, a spin-off of consumer goods company the Engin Group, is described by its parent company as among its most important investments ini achieving its ‘sustainable future vision’ strategy, which aims to return its plastics to the commodity cycle.

The Düzce plant has set an early target of recycling 90 tonnes of high-quality PET flakes per day for use in films and for bottle-to-bottle recycling.

The modularisation of its plant concept with standardised assemblies enabled Herbold Meckesheim to implement the construction smoothly and quickly. Some modules were scaled up for Futurapet to achieve the required throughput.

In addition, a step drying system was integrated into the hot washing process to increase quality. Recycling-batteries – Green-hydrogen

-The ‘Natural’ History of Plastics is … well, ‘Circular’

This blog post started with my refrigerator. I took out a carton of milk for my morning tea and my wife’s breakfast cereal, and it smelled … off. The only milk I had on hand had gone sour.  Recycling-batteries – Green-hydrogen

Not the best way to start the day. But it did get me thinking about lactic acid (the sour taste in spoiled milk) and polylactic acid (PLA) the leading biopolymer today. While I was explaining this fascinating connection to my wife, who may have been less fascinated, I thought, Wait a minute … milk was used for plastics a long, long time before PLA was invented.

And then it dawned on me: Chemical companies today are in a rush to convert their plastic products to biobased “renewable” feedstocks—but that’s exactly what the first plastics were made from. Celluloid, the first commercially successful synthetic plastic (setting aside natural rubber and gutta percha) was made from cotton or wood pulp and commercialized in 1872. And plastic resins based on casein — milk protein — date back to 1897. The latter were used mainly in buttons.

You won’t see any casein-based buttons nowadays, except in a museum or collection of antiques, but cellulose acetate plastics made from wood pulp are still commonly used in eyeglass frames, films appliances, housewares, medical devices, cosmetics and a miscellany of other products.

In the intervening century and a half, the chemical industry fell in love with derivatives of coal, oil and natural gas. But at least one humble biobased feedstock found a home in plastics, unheralded until recently. For almost 60 years, castor oil has been the basis of long-chain nylons such as 610, 11, 1010, 1012 and 410.the keywords to many developments in plastics today — which takes us back to the very origin of the plastics industry. How’s that for ‘circularity’?  Recycling-batteries – Green-hydrogen 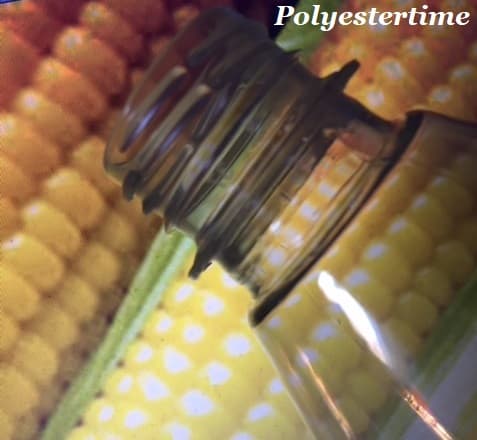 Click  here to see the latest blog post on Asian Chemical Connections by John Richardson. There is some excitement out there that China’s polyolefins markets have finally bottomed out.

But any recovery seems likely to be supply rather than demand driven. Rate cuts at local refineries in April-June were said to be the highest ever, reflecting weak fuels demand. The rate cuts might reduce the availability of feedstocks to make polyethylene (PE) and polypropylene (PP).  Recycling-batteries – Green-hydrogen

But if fuels demand is weak, so must be polyolefins demand. Weak demand looks set to continue because China has no choice but to stick to its zero-COVID policies.

And because of the “Common Prosperity” economic reforms, low economic and so chemicals demand growth is, anyway, no longer seen as such a bad thing. China has moved past its era of growth for growth’s sake.

Still not convinced? Then look at the ICIS data which show:

Under a best-case outcome, average PE demand across the three grades would decline by 2% in 2022 over last year. The medium-case scenario would see consumption fall by 4%, which is what is suggested by annualised local production and net import data for January-June this year. The worst-case result would see a 5% contraction in demand. 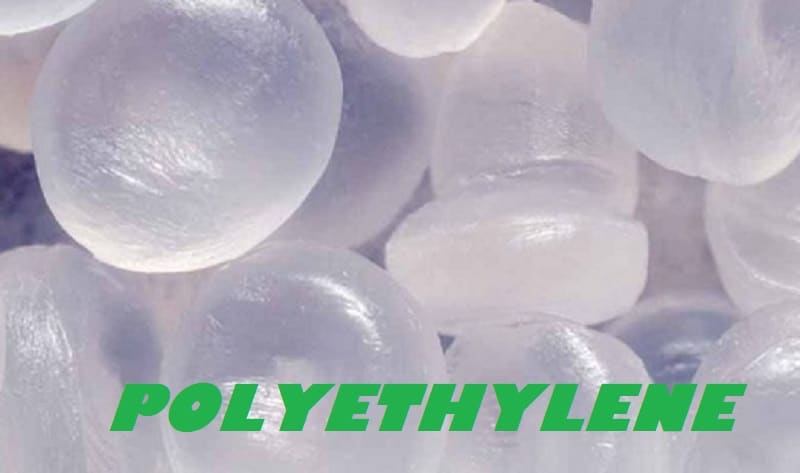 -Bershka and Resortecs launch collection of jeans designed for recycling

Brussels-based start-up Resortecs is partnering with Bershka, a global  fashion brand part of the Inditex Group, to launch a new capsule collection using the start up’s design-for-disassembly technology to facilitate recycling and upcycling.

The collaboration brings together summer and circularity in two unisex products – denim  shorts and jeans – made with Resortecs’ Smart Stitch™ for easy disassembly. The products will  be available online and at selected stores in 60 markets across the world as of 5 August. Recycling-batteries – Green-hydrogen

Resortecs aims to boost textile recycling with two patented innovations: Smart Stitch™, heat-dissolvable stitching threads, and Smart Disassembly™, an industrial oven capable of taking apart the different components of clothing made with Smart Stitch™. This way, the start-up expects to reduce the high costs and complexity of separating different textile materials ahead of recycling.

For Bershka, this collaboration is part of Inditex’s Sustainability Innovation Hub: an open-innovation platform that works alongside start-ups, academic institutions, and tech centres to promote and scale disruptive solutions for new materials, technologies and processes that reduce the environmental footprint of fashion products and help advance towards circularity.

Founded in 2017 by Cédric Vanhoeck and Vanessa Counaert, Resortecs has already validated its solution with over 30 international fashion players:

We are thrilled to work with Bershka. Since day one, we’ve been positively surprised by how much their team is committed to the circular transition.

The final products look great and have infinite possibilities for their next lifecycle. – Cédric Vanhoeck, co-founder & Executive Lead 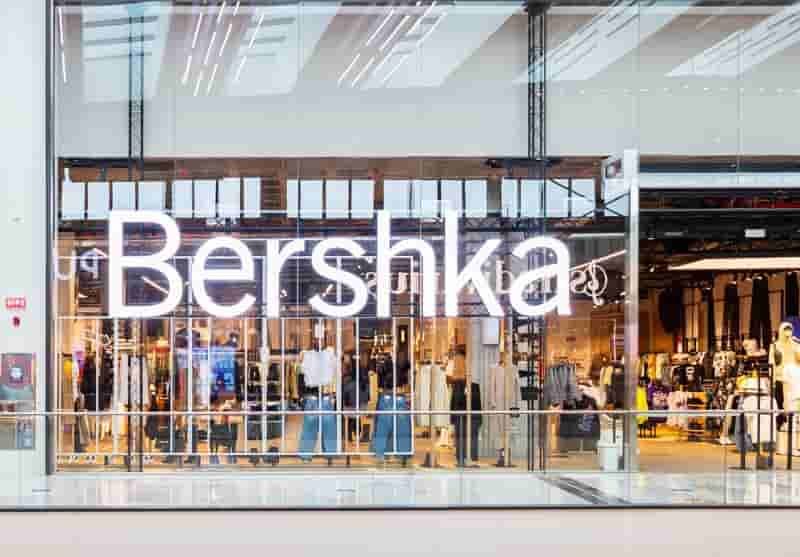 Researchers at Worcester Polytechnic Institute (WPI) have developed a sustainable lithium recovery process which can selectively leach and recover lithium with formic acid before recycling valuable metals. With their method, lithium can be 99.8% recovered from layered oxide cathode materials with 99.994% purity.

In addition, this lithium recovery process is affordable, compared to typical hydrometallurgical process, by saving 11.15% per kilogram spent LIBs. An open-access paper on the work is published in the RSC journal Green Chemistry.

Meanwhile, due to the long lead time and limit production to mine and brine operations the demand may outstrip supply as early as 2022. As the economy recovers from the pandemic, the price of the most common traded forms of battery-grade lithium salt in the global market including Li2CO3 and LiOH was increased very significantly in September 2021. The price of battery-grade Li2CO3 in 2022 reached $76,700 per ton, which surpasses the previous cost of $24,750 per ton in March 2018. Moreover, LiOH price rose an average of $77.5 per kilogram. Whether it is an excessive increase in the price of lithium or an inequality between supply and demand growth of lithium, it will cause a devastating impact to the development of EVs, mobile electronics and energy storages.

As there are 5-7% of lithium in spent LIBs depending on different types of LIBs, recycling is an effective way to reduce the bottleneck of the lithium supply chain and shorten the supply-demand gap of lithium. For example, a single car LIB pack based on LiNi0.5Mn0.3Co0.2O2 contains around 8 kg of lithium.

It is predicted that the complete recycling system would reduce the demand for mined lithium to 37%. However, a rare focus was placed on recycling lithium from spent LIBs because it is less expensive than other elements, such as Co. Nevertheless, with the sharp rise in lithium price and the increased number of spent LIBs, the situation starts to be upturned. Recycling-batteries – Green-hydrogen

The WPI team developed a highly selective process of lithium extraction via concentrated formic acid leaching. In this process, lithium is preferentially extracted with only a trace amount of transition metals (< 5%) leached into the solution. The optimized condition is obtained at 60°C for 5 hours. 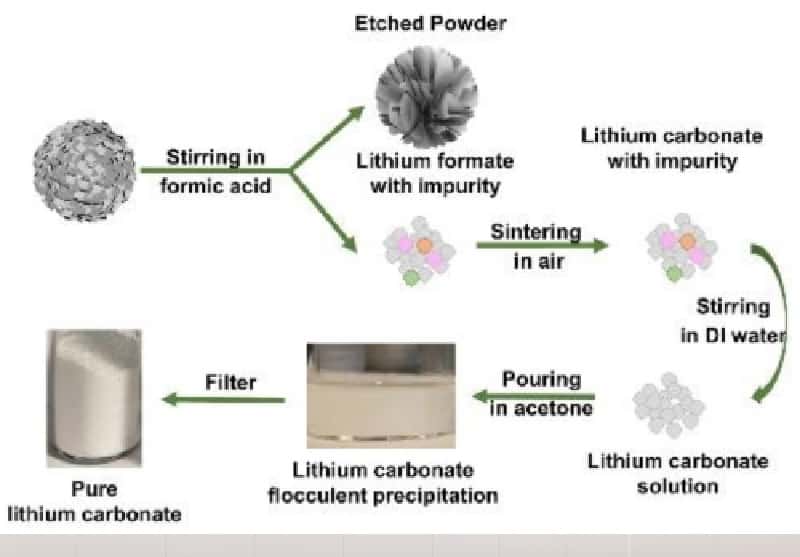