-Braskem and Sojitz to collaborate on scaling bioMEG technology

Braskem and Sojitz Corporation have signed an agreement to establish a joint venture that will produce and market bioMEG (monoethylene glycol) and bioMPG (monopropylene glycol), which will include the construction of three industrial units in a bid to start production in 2025.

MEG is a raw material used in the production of PET, which has a number of packaging applications, such as beverage bottles. It is produced mainly from fossil-based raw materials such as naphtha and gas. Meanwhile, MPG is used for applications including unsaturated polymer resins (UPR) and cosmetic products.

In 2017, Braskem partnered with Haldor Topsoe, a developer and provider of solutions for the production of energy-efficient fuels and chemicals. The companies aimed to demonstrate technology for converting sugar into bioMEG and bioMPG, with the first bioMEG samples produced in 2020. BioMEG-technology – Chemical-recycling

The joint venture announced by Braskem and Sojitz will focus on producing and marketing bioMEG and bioMPG. Subject to the conclusion of technology development in 2022, the business plan includes the construction of three industrial units, with the start-up of the first plant slated for 2025.

According to the companies, the joint venture will combine Braskem’s expertise in the industrial production and scaling of chemicals and plastics made from renewable sources with Sojitz’s strong presence in Asia, a region that represents 80% of the global MEG market and where its consumption has reportedly registered the highest growth.

Gustavo Sergi, renewable chemicals and specialties officer at Braskem, comments: “We are pooling the efforts, expertise and investments of the two companies that are references in their respective segments to create a global leader in bioMEG that can meet the strong market demand for sustainable and renewable products. 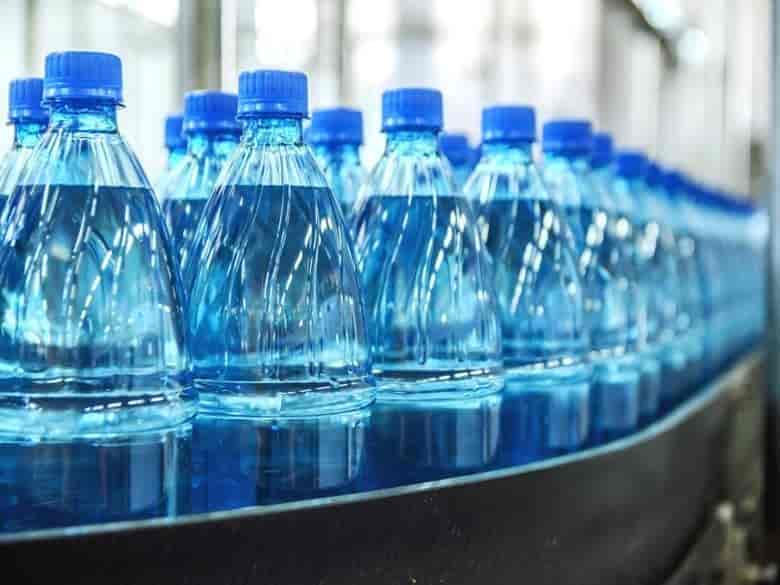 Today, Quantafuel announces Proof of Concept (PoC) for its Skive chemical recycling plant after more than seven days of continuous operation at a level corresponding to an annual capacity of 16,000 tonnes of plastic waste infeed. “This represents a major milestone for chemical recycling, Quantafuel and our future growth,” says Quantafuel’s CEO Lars Rosenløv. BioMEG-technology – Chemical-recycling

“Reaching this milestone is an important breakthrough for the company and for chemical recycling. It has taken us longer than anticipated, but systematic problem-solving by the entire organisation the past few months has made it possible. Following the upgrades made in the fourth quarter, we have known that our process and technology works. Now we have also managed to improve and balance the uptime and capacity,” says Quantafuel’s CEO Lars Rosenløv.

The last two weeks in January, Quantafuel processed 100 tonnes a week. Over the past seven days, we have converted 145 tonnes with the same two lines. This PoC level corresponds to 16,000 tonnes annually at plant level and previous runs have proven that the lines can run at an even higher level.

“We will continue our systematic approach removing bottlenecks and optimise operational parameters reaching for higher throughput and earnings. This is a normal exercise in the process industry,” Rosenløv continues.

We will revert with a guiding on Skive in due course.

Recently, we communicated that Quantafuel is ready to move forward with a next generation of larger-scale Plastic-to-Liquid plants. Today’s announcement reinforces this.

“We are well positioned to become a major, integrated recycling player and I look forward to continuing the journey. Today we celebrate a major achievement and thank all our employees, partners, contractors, suppliers and supporters,” Rosenløv adds.

The achieved PoC equals more than seven days of continuous production with an uptime above 90% at 16,000 tonnes of annual capacity, with an overall oil yield of 68%.  BioMEG-technology – Chemical-recycling

Thailand-based polyethylene terephthalate (PET) and surfactants producer Indorama plans to invest around $8bn in recycled and bio-based plastics to meet its goal of having 25% of its feedstocks circular or bio-renewable, its CEO said on Sunday.

“Mechanical recycling will continue but the big game changer will be a new chapter of advanced recycling and bio-renewable feedstock,” said Aloke Lohia, CEO of Indorama, in an interview with ICIS. BioMEG-technology – Chemical-recycling

“For bio-based and advanced recycling, the scale is just not there yet. I take this as my personal challenge to deliver on this, and we are prepared to invest $8bn from now to 2030,” he added.

Lohia spoke to ICIS on the sidelines of the International Petrochemical Conference (IPC) hosted by the American Fuel & Petrochemical Manufacturers (AFPM).

Chemical recycling of plastics is also known as advanced recycling.

“We will scan the world for those developing these technologies, and can offer our sites for them to experiment,” said Lohia.

Indorama also has a nearer-term goal of bringing its recycled PET feedstock to around 700,000 tonnes/year by 2025, with $1.5bn in investments. The company announced this goal three years ago, and today is at about 400,000 tonnes/year, he noted.

“All of this is on track but today this is only 2% of feedstock. We want to get that to 25% by 2030 – that’s the big milestone,” said Lohia, who added that the company’s commitment to sustainability was one of the reasons for being selected for the Petrochemical Heritage Award.  BioMEG-technology – Chemical-recycling 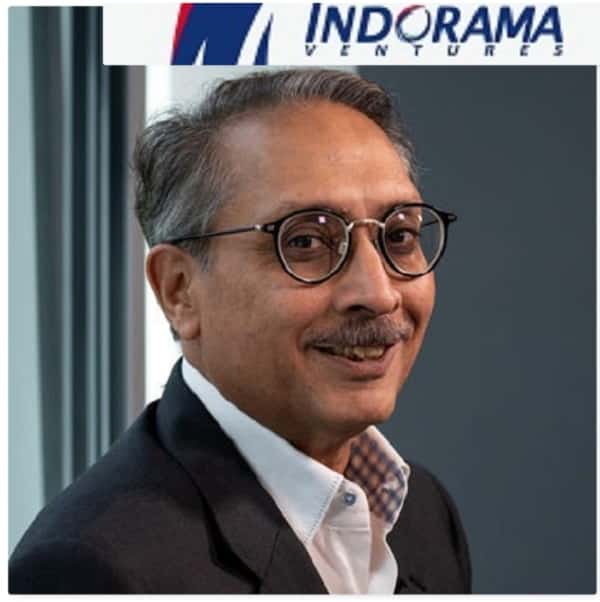 Researchers from Technion – Israel Institute of Technology have successfully created conductors that are relevant to solar energy generation, biomedical engineering, and more using by-products of the food industry BioMEG-technology – Chemical-recycling

The journal Advanced Materials has reported on the success of Technion – Israel Institute of Technology researchers in creating conductors that are relevant to solar energy generation, biomedical engineering, and more using by-products of the food industry that would otherwise be discarded as waste. The technology demonstrated in the article allows for the simple, fast, cost effective, and environmentally friendly production of biopolymers, which include application for electrophysiological signal sensing.

The study was conducted in the Schulich Faculty of Chemistry under the leadership of Assistant Professor Nadav Amdursky, Head of the Biopolymers and Bioelectronics Laboratory, and doctoral students Ramesh Nandi and Yuval Agam. According to Prof. Amdursky, “The current global green trend has not bypassed industry, and numerous groups worldwide are working on new solutions that will limit the pollution caused by the production of synthetic materials and by their very presence. One of the options is, of course, the use of natural materials, and the big challenge is to adapt them to meet needs.”

Polymers are long chains made up of thousands of building blocks called monomers. Silk, wool and cotton fibers are examples of natural polymers, whereas nylon and PVC are synthetic polymers. Conductive polymers are a subgroup of polymers, and they serve for a vast variety of applications: electronics, energy storage, fuel cells, medicine, and others. These polymers are currently produced using processes that are costly and cause pollution due to the use of derivatives of oil, gas, and fossil fuel.

The alternative proposed by the Technion research team is protein polymers – molecules that are present in different biological tissues such as silk and wool fibers, spider webs, hair, and nails. Here, as mentioned, they are by-products of the food industry that would otherwise be discarded as waste. According to Prof. Amdursky, “The inspiration to use proteins to create conductive polymers originated in the unique function of proteins in nature – they are exclusively responsible for transporting various charge carriers in flora and fauna; for example, in cellular respiration or in photosynthesis in plants.”  BioMEG-technology – Chemical-recycling

The researchers created transparent polymer films with high conductivity. This film is suitable for biological and biomedical applications since it is non-toxic. It is biodegradable in the human body and can be stretched to approximately 400% of its original length, without significantly impairing its electrical properties. Its conductivity is among the highest detected in biological materials.

According to Prof. Amdursky, “The production of the film in our research was a one-pot process, spontaneous, inexpensive, fast, energy efficient, and nonpolluting. In the article, we demonstrate the use of the film as ‘artificial skin’ that noninvasively monitors electrophysiological signals. These signals play a meaningful part in brain and muscle activity, and therefore their external monitoring is a highly important challenge.”

-The evolution of extrusion

Back in the late 90s I took a temporary job as a janitor at Britton TACO’s film extrusion site for packaging applications on Winsford Industrial Estate. The factory floor was dark, dusty and littered with thousands of lost little pellets that I was tasked with sweeping up and sieving into a bulk bag ready to be shipped off to I have no memory of where. BioMEG-technology – Chemical-recycling

I believe this was possibly best practice post-industrial recycling at the time, please correct me if I’m wrong.

It was noisy, and the shifts were long and lonely. The only social space I recall was a box room with makeshift wooden benches around the perimeter, where dozens of overall-clad lads sat eating sandwiches and smoking during breaks.

Almost a quarter of a century later I returned to the site, now operated by Coveris UK, in the capacity of a plastics industry journalist. Now a much more illuminated place to work than I remember, the factory floor is cleaner by far, and I saw approximately zero bulk bags containing a compound of pellets reclaimed from the floor and dust and general industrial detritus. There were no janitors. It even seemed quieter, most likely due to improvements in the extrusion machinery and relevant process control technology. A stylish canteen has been established where employees can sit in comfort whilst watching the news. And, of course, there is no smoking. The only familiar thing to me was the warm smell of the great vibrating bubbles as they stretched upward toward the roof.  BioMEG-technology – Chemical-recycling 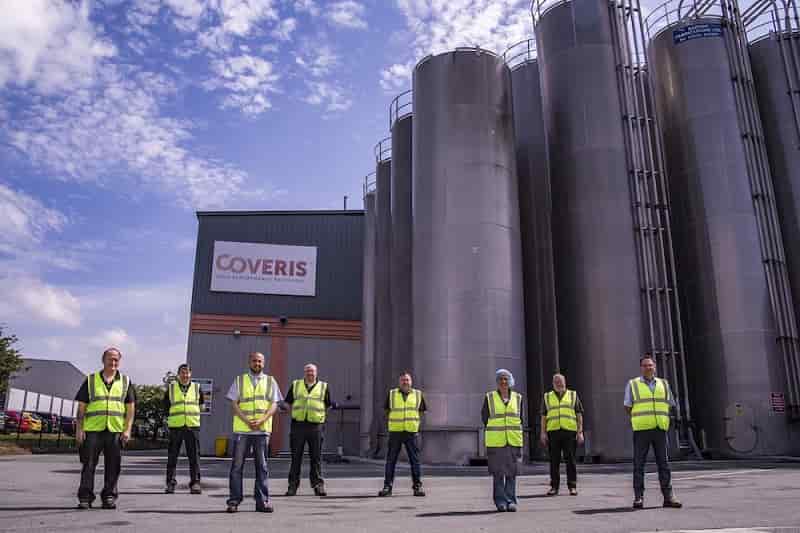 Patrik Lundström is pleased with his new pair of Levi’s 501s. “The touch and feel is exactly the same as your cotton jeans,” he says. Lundström is CEO of Renewcell, a Swedish start-up that has created Circulose, a cellulosic fiber made by chemically recycling postconsumer waste cotton. About 16% of the cotton in Lundström’s Levi’s has been replaced with Circulose. Lundström is heralding the switch as a new start for the unsustainable textile industry. Unlike garments made of virgin cotton or polyester, those made from Circulose have a “fashion footprint” of almost zero for waste creation, climate impact, water consumption, microplastics generation, and deforestation, the company claims.

The textile industry, with its ever-growing environmental footprint, is crying out for sustainable technologies. A wave of new companies is responding with chemical-based recycling technologies for all the main fibers, including cellulosics such as cotton, and synthetics like polyester and nylon.

But no single company yet has the complete process to recycle all fibers. And none of them are producing commercially viable amounts of recycled fibers yet.

Indeed, stakeholders, including fashion companies and waste collectors, face myriad challenges if they are to deploy such technologies at a meaningful scale. Some of the issues are technical, such as the unsuitability of certain types of textile waste to most recycling processes. A lack of adequate supplies of cellulosic textile waste for recycling also looms. If the sector’s key actors pull together, though, new recycling technologies could play a major role in helping the textile industry slash its environmental impact.

Consumers around the world are buying clothing and other textiles at such a scale that the sector’s environmental footprint is now the fourth largest, after food, housing, and transportation, according to the Ellen MacArthur Foundation, a UK think tank promoting the circular economy.  BioMEG-technology – Chemical-recycling

The world’s multibillion-dollar textile industry generates 1.2 billion metric tons (t) of CO2 annually, more than the emissions from all international flights and maritime shipping combined, according to the Ellen MacArthur Foundation. Other impacts include the water and pesticides used to grow cotton, water pollution during fiber spinning and dyeing, and the release of microplastics into the oceans from the household washing of garments made from synthetic fibers. 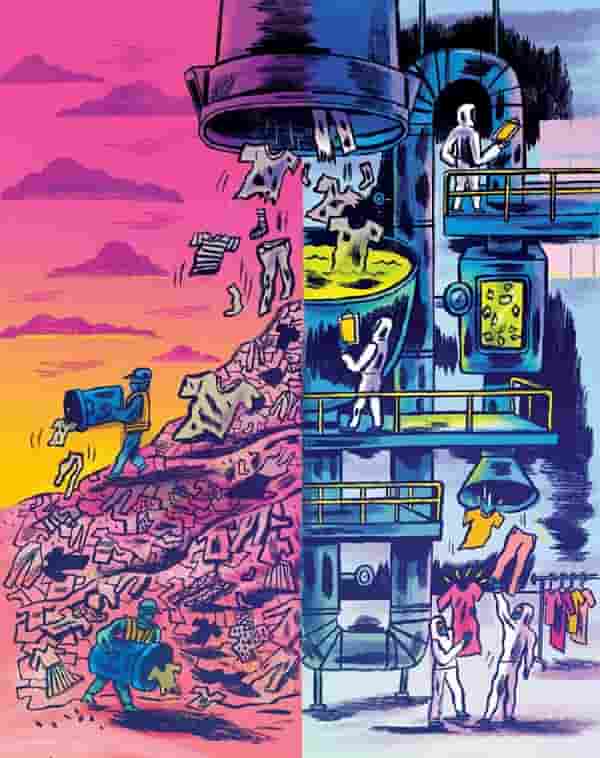